Written by Kate Bridal
Updated over a week ago

Finding the correct keywords for a search can be really tricky. Especially if, like me, you got to law school, heard someone use the word “boolean,” and immediately wondered why they were talking about salty flavor cubes (or gold, if that’s more your thing).

But seriously, poorly-chosen search terms can quite literally make the difference between success and failure in document reviews. Knowing which search terms are working and which aren’t allows users to adjust searches accordingly and find data they may be missing.

Previously, Logikcull users could input search terms under the Bulk Keyword Search tab and get a quick overview of how many documents in a matter each search hit upon. But that left a lot to be desired. For instance, if you wanted the total count of terms, you were SOL (search outta luck).

This update serves up a much more comprehensive analysis of how those terms are performing. Logikcull will break the list down and automate running it, then return statistics that will help users quickly get a handle on their overall document population and see terms that are over or under-responding.

To use this nifty feature, click Search -> Search Gear -> Bulk Keyword Search. Enter search terms one by one or paste in a list. Then, use the “Test Searches” button to see basic per-term stats. Nothing new here. But then press the “Build Search Report” button to get a detailed breakdown that shows, among other things, combined hits from the list, per-term counts, exclusive per-term hits, and family counts. Yeah. Now we’re in Oz.

Some things are counterintuitive, like Reno being further west than Los Angeles or the fact that bananas are actually an herb. Logikcull prides itself on being intuitive, but there was a feature that seemed a little off: Users could select text to annotate, but not to redact.

How did redactions used to work? Well, users had to draw rectangles by hand to redact items individually. I love a good rectangle-drawing session as much as the next gal, but I also have a life to live. The first season of Fargo ain’t gonna re-watch itself.

Enter our new feature, Select to Redact! Logikcull users can now select PDF text, toggle to “Redact” mode, and redact with a click. They can also switch between “Annotate” and “Redact” modes to their hearts’ content. Here’s what the new buttons look like when you select text:

You can also toggle this option in the Redactions Toolbar:

Talk about a time-saver! Speaking of…

If you’ve used Slack or ever had to deal with it in the context of discovery, you know it is a behemoth of data. You can have roughly eleventy billion channels for a single organization, and Slack can support unlimited users per organization, and more than 100,000 users per channel.

Apparently, nobody has ever reached the channel user limit, but we’ve heard from customers about some pretty significant production requirements involving 400+ users. Previously, Logikcull required clicking each user you wanted to import data from one at a time. Needless to say, 400+ clicks adds up to... Um, more than 400 clicks.

But no more! We are thrilled -- or is it relieved? -- to announce that users can now hit “Select All” when uploading Slack user data into Logikcull and get all those users in with a single click! 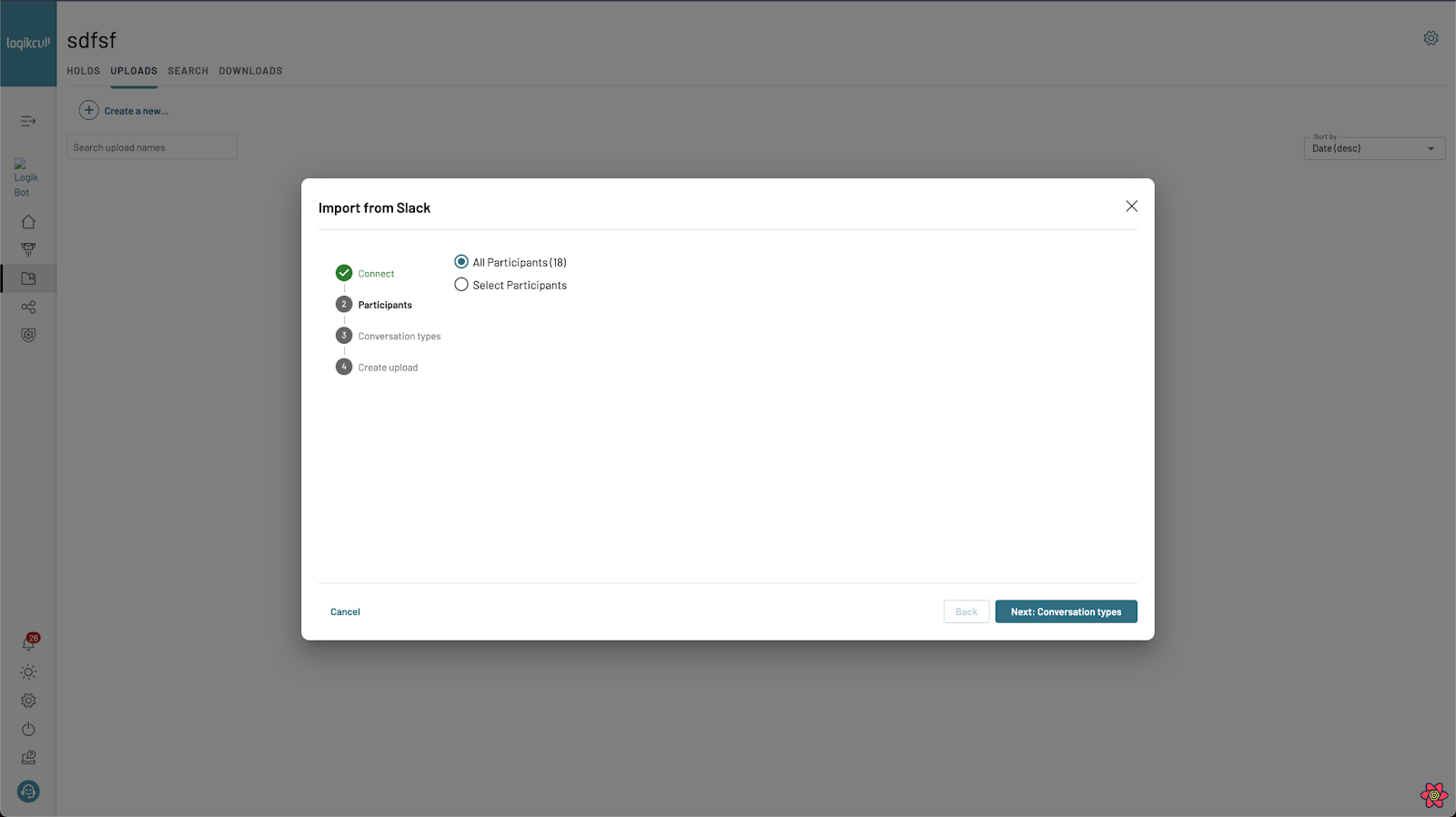 You can use all that leftover clicking energy to click on something fun, like cat videos or all of our fun YouTube Shorts. Why no, I am not above shameless self-promotion, thank you for asking.

Much like Benedict Cumberbatch, this feature doesn’t have the sexiest name but is actually very hot.

I just got so distracted by this series of Benedict Cumberbatch GIFs that I missed the start of a meeting. Please don’t tell my boss.

Sometimes, data needs to be copied from one project to another. It would be nice if all those beautiful redactions, upload names, and Bates numbers Logikcull lets you create so easily were copied with it.

Unfortunately, Logikcull users historically had to download the data, hand-modify it, and reupload it to the new project. To quote Grayson Hodnett, one of the developers on this feature, “Not powerfully simple!”

So in the interest of powerful simplicity, there are several new checkboxes on the data copy creation form that allows Redactions, Upload Name, and Bates numbers to be moved over to corresponding documents in the destination project. This feature also correctly copies over redactions AND their labels (creating new labels as needed in the destination project). And did I mention that Upload Name and Bates Numbers will be searchable, sortable, and downloadable? 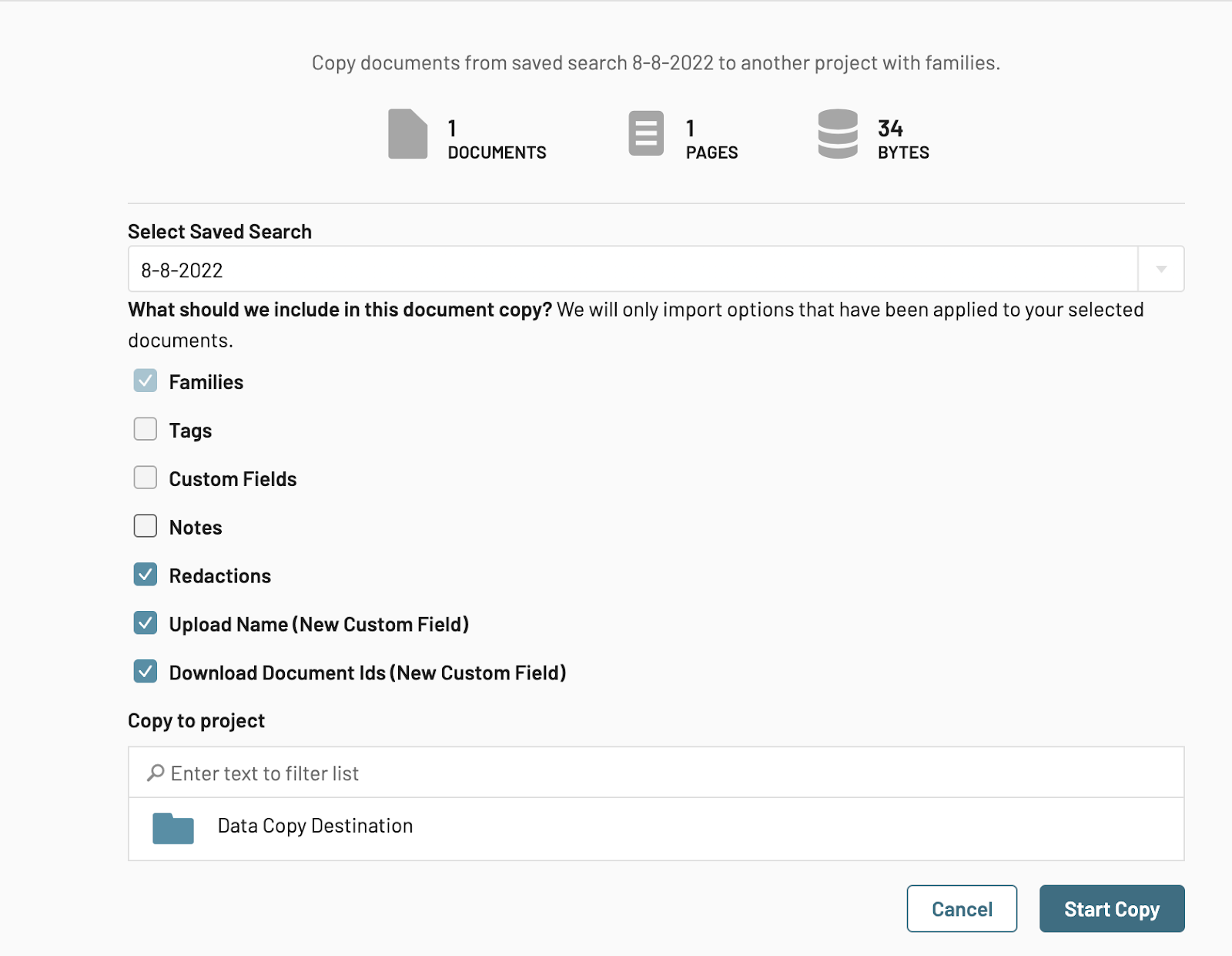 I just feel the need to mention that this apparently only took the team TWO DAYS to build. They insist that they used “engineering” and “science” but I’m pretty sure they’re all graduates of Hogwarts. (I actually do have reason to believe that Grayson is a full-on warlock, but that’s a story for another time.)

Though these updates be but little, they are fierce. Improvements to the Tags Page include the ability to:

They also fixed bugs around changing the color of the tag folder.

Believe it or not, there are other really amazing features that are ready to go… But we’re going to make you wait for InHouse 2022 to find out what they are. I’ll just say that you should mix up this OCR cocktail created by Logikcull’s own Matt Jones in preparation for the announcement.